Thursday’s delightful snowfall took a chunk out of my productivity this week, like that bothered me all that much. Except it kind of does–Saturday evening, I start my journey to Barcelona for Mobile World Congress. Which means Monday can’t be much of a holiday for me.

This was originally going to explain the business models behind e-mail hijacking (I felt vaguely insulted to be told that in most cases, a hijacked e-mail gets used for nothing more ambitious than sending spam) and then critique the Computer Fraud and Abuse Act. But my editor said the CFAA parts read like a separate column, and I had to admit he was right. I’ll get back to that, but not next week: There’s a certain gigantic proposed cable merger that calls for my attention first. 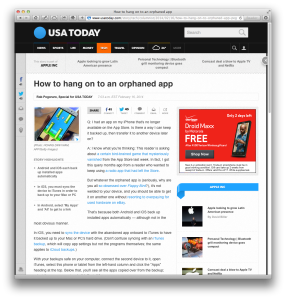 This was a somewhat shameless case of my taking advantage of the fuss over Flappy Bird (sorry, I don’t care about that game) to address a reader query I’d received months earlier about a different app. But Apple’s decision to boot a Bitcoin-wallet app from the App Store also factored into the timing here. The tip here about how developers keep less of the price of an app sold at the Mac App Store revisits a topic I’d last addressed in a January 2011 Post blog post.

At Sulia, I shared two sets of quotes from a great panel discussion among teenage social-media users led by my Yahoo Tech colleague Dan Tynan, recounted a tech startup’s testimony about its experience beating a patent troll in court, listed two questions left up in the air about Comcast’s proposed purchase of Time Warner Cable, complained about NBC Washington’s reportedly strong but now-unwatchable over-the-air signal, and provided an update about the fake Facebook account I’d set up when writing a privacy cheat sheet about the social network for Yahoo.