I woke to find about nine inches of snow had accumulated overnight. That’s the most snow we’ve had all season and the most we’ve had in three years–two of which were less like a traditional D.C. winter and more like a colder version of the Bay Area’s rainy season.

As much as I like the Bay Area’s climate, I love living in a place with distinct seasons that include real winters. And no winter is complete to me without a full-on snowstorm that leaves roads impassable, shuts the airports and frees me to play in the snow–because I am basically eight years old at these times.

Today’s snow isn’t in the same league as the historic snowstorms I’ve seen here, but it will have to do.

January 1996: This remains a sentimental favorite for how it helped bond me to the District. As the snow started falling, I decided I couldn’t watch it from inside the apartment I’d moved into weeks before. I wandered down from Kalorama to Dupont Circle, made my way to Kramerbooks, bought a copy of Edward P. Jones’ “Lost in the City,” and read his stories of wayward Washingtonians at the bar as the snow laid a hush over my beautiful neighborhood. By the next morning, 17.1 inches had fallen, and I was proud to be one of the few Posties who made it into the newsroom–having walked down the middle of Connecticut Avenue to get there.

The effects of the blizzard lingered for years; later in January, a torrent of snowmelt led a swollen Potomac to flood and tear up much of the C&O Canal, and the Park Service didn’t finish repairing the towpath until 1998 or maybe 1999.

Presidents’ Day, 2003: This could have been a lot more fun. We were in West Virginia to go skiing and should have stayed there. Instead, I was on the losing end of a group decision to head home early. After the long drive home in a blizzard, the first two hours involving too many tense moments on twisting mountain roads, I needed a drink. Instead, I realized there was enough snow on the ground (16.7 inches had fallen) and enough elevation changes in the adjacent blocks for me to finish my skiing without paying for a lift ticket. I enjoyed carving turns around parking meters.

December 2009: This was the first time I could make serious use of the cross-country skis I’d picked up a year or two earlier. I enjoyed “Snowpocalypse” by clocking about six miles through the streets of Arlington, finally turning around on the Fairfax Drive onramp to I-66 after I’d spent a few minutes contemplating a snow-covered highway devoid of cars. I ate well that night! The next evening, I took my downhill skis to a nearby park, where the 16.4 inches of snowfall had turned a series of steps into a miniature jump.

This was also the first snowstorm where I both had a digital camera to document the scenery and a choice of social-media sites to share those photos.

February 2010: Washington’s most epic winter ever continued with a pair of blizzards–one depositing 17.8 inches, the second running up the score with 10.8 inches–not even half a week apart. The first day after “Snowmaggedon,” I spent almost five hours cross-countrying as far into the District as Rock Creek Park–in the process, checking “cross the Key Bridge in a car, on a bus, on a bike, on foot, and on skis” off my bucket list. A day later and considerably more sore, I ventured out again and inspected some impressive snow architecture on the Mall.

I wasn’t the only person doing a lot of urban skiing at the time. Some crazy kids in Pittsburgh put together an amazing video of them skiing and snowboarding down Mount Washington, among other unlikely spots around the city. Seriously, just watch it.

1/16/2014: Now that I finally uploaded a few dozen photos from the 2009 and 2010 snowstorms to Flickr (I’d only shared them on Facebook at the time, for reasons I don’t entirely remember), I embedded a slideshow of them after the jump. 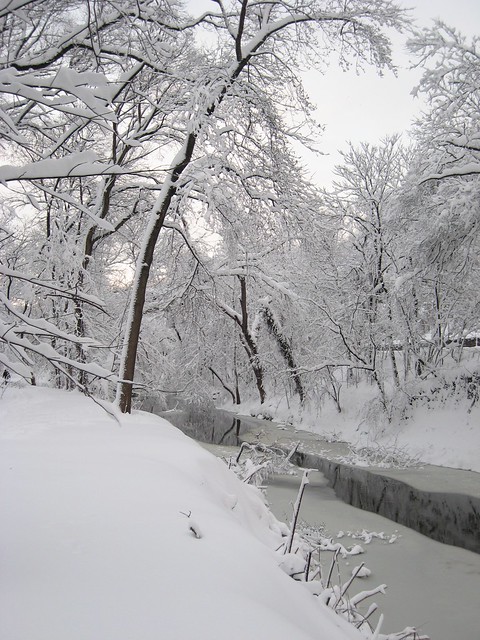 7 thoughts on “D.C. snowstorms are the best”