The forecast calls for below-freezing temperature tonight, so I officially put this year’s gardening season in the books by plucking the last few, still-green plum tomatoes off their dying vines. That also means it’s time to assess how growing my own food worked this year, as I did in 2011 and 2012. 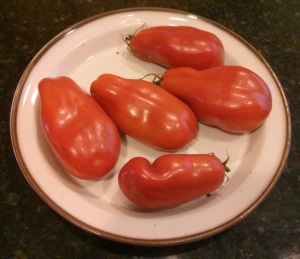 The removal of a tree that had cast too much shade on one raised bed and, I guess,  better luck made a huge difference: We’ve had a good selection of plum tomatoes since about the middle of the summer–even while the other two plants yielded next to nothing. It was nice being able to skip buying plum tomatoes at the farmers’ market.

Unlike the last two years, I couldn’t get a fall crop started in time (I blame travel and a failure to focus when I was in town, followed by the stores near me removing seeds from their shelves), and the spring crop didn’t yield as much as before either. Even so, I’ll repeat my prior endorsements: This stuff practically grows itself, yo

I love being able to step outside, grab some lettuce leaves, wash them off and put them on a sandwich or a burger. But without a fall crop (see above), that pleasure ended sometime in June.

These were late starters but came around over the last two months. Considering what red bell peppers cost in the store, they’ve definitely earned a spot in next year’s garden.

Once again, I didn’t plant enough in the spring–I could pick enough beans off the plants to make a side dish for one, not so much for two and certainly not for four. And then a dry August put a stop to the whole enterprise.

These did much worse than I expected, and I can only guess it’s because I took too long to enrich the soil around them with compost. The mint was its usual bulletproof self (it’s in a separate pot to stop it from overrunning the entire back yard), but cilantro was a no-show, and rosemary, sage and thyme died on me more than once. And the basil never yielded enough for a batch of pesto: How pathetic is that?

The pot on the back patio yielded fruit more often than last year, but I still haven’t figured out how to avoid having the squirrels make off with too much of it.

This was not the complete failure of last year, only a nearly-complete one. That leaves me even more confused as to how this vegetable could have grown so well two years ago and not since.

Also worth noting: Not through any effort on my part, I had a butternut squash vine grow on its own in one of the raised beds and give me exactly one squash.