If I didn’t have a calendar to tell me November had arrived, the recent acceleration in the frequency of CES PR pitches would clue me in almost as well.

I returned to my occasional role as Twitter-chat host for IDG Enterprise’s site for this discussion of the upsides and downsides of mergers in the wireless industry.

My recap of the discussions at this year’s Future of Music Summit spotlighted some enlightening data about where musicians make they money these days and conflicting views on the potential of streaming-music services such as Spotify. I left the conference thinking, once again, that more journalists should pay attention to indie artists’ attempts to find a more solid economic footing–our business-model issues are not too different, even if we’re a lot less cool. 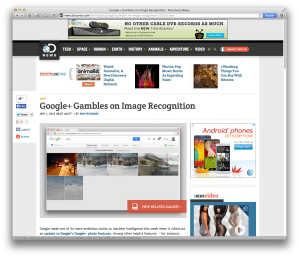 My final post at Discovery (see yesterday’s post for more about that), had a little fun with Google+ image recognition’s performance in some sample searches of the photos I’ve been uploading from various mobile devices since G+’s debut. If only the screengrabs I took to illustrate this were not so unavoidably boring…

My editor said my first draft of this column was a little in the weeds, and she was right: The issue here isn’t just Apple’s Mail app reacting badly when asked to sync with Gmail, it’s Apple’s failure to give users a heads-up about the change or explain it later on. As you can see in the comments, I goofed about the price of Mailplane–it’s $24.95 instead of free–so we’ll get that bit corrected.

On Sulia, I applauded the maturity of iPad users who didn’t mob Apple’s stores to buy the new iPad Air, voiced a similar skepticism about the need to trade in my Nexus 4 phone for the new Nexus 5, predicted some awkwardness in Twitter’s automatically displaying many shared images and complimented Spotify and services like it for being a much easier way to discover the Velvet Underground (RIP, Lou Reed) than radio.