According to this list, I spent more time talking about my job than actually doing it (and it’s not even counting the roughly three hours I spent talking to local startups at Day of Fosterly Saturday). That’s not actually true, but it’s not far from the truth either. 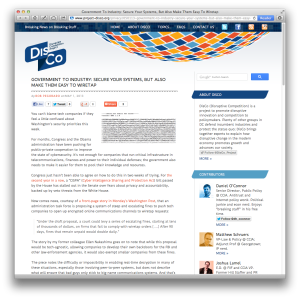 5/1/2013: Government To Industry: Secure Your Systems, But Also Make Them Easy To Wiretap, Disruptive Competition Project

This post started when I read my old Post colleague Ellen Nakashima’s front-page story about a campaign to compel Internet services to provide real-time decryption of their encrypted communications services for law-enforcement inquiries. Then I thought about how that effort might square with the last two years of debate over what the Feds can do to get private industry to strengthen its cybersecurity defenses–and realized how that paralleled mid-1990s arguments over the government’s “Clipper chip” scheme.

Déjà vu set in as I once again found myself onstage with Paul Sherman to talk about how the media covers tech startups–this time at the 1776 incubator on 15th Street downtown, almost directly across from the Post.

I returned to Gene Steinberg’s podcast to talk about Apple’s cliff-diving stock price (and what that says about Wall Street’s short-term judgment), Samsung’s Galaxy S 4 and the Electronic Frontier Foundation’s latest report on how well some major tech companies protect your data from government inquiries.

The post I wrote here about how much data people actually use on their phones led to this column questioning the value of unlimited-data wireless plans. It has not won universal applause so far. Ars Technica’s Jon Brodkin astutely pointed out that if you signed up for Verizon’s old unlimited plan long enough  ago, you could well save money by sticking with that, even if you have to pay an unsubsidized price for a phone; I was less persuaded by people saying they plow through 15 or 20 gigabytes a month without citing what apps chew up that much data.

On Sulia, I assessed the iOS version of Google Now, shared some quick reactions to my Fosterly Media Match experience, related how much my Nexus 4’s battery seems to like being on WiFi and 3G at the same time, and asked Web admins to make sure that site addresses don’t require users to type in a “www” prefix.