A decade ago, I was staying up late to watch my country invade another. I had a personal investment in the war I saw unfolding on TV and on the Web: One of my cousins was a corporal with the Marines, and his unit was crossing the border into Iraq. And I had been persuaded that we were doing the right thing. 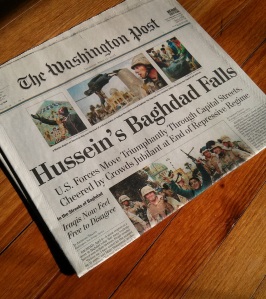 The reporting I’d seen in my newspaper and others told me that we had probable cause of Iraqi chemical, biological and nuclear weapons efforts. The front page of March 20th’s edition of the Post treated them as givens.

Sure, I hadn’t found President Bush to be the most convincing advocate. But Colin Powell knew of what he spoke, right? And I, like others, thought British prime minister Tony Blair had made an eloquent case for the grim necessity of war.

Early on, it looked like we’d be proved correct. Only weeks after the start of the war, Baghdad fell; I kept that day’s A section of the Post as a souvenir.

Then everything got so much more complicated over weeks, months and years. My cousin came home safe (as did his sister, who followed him into the USMC and then Iraq), but thousands of other Americans did not. The day-one gung-ho reaction on newspaper front pages looks like a cultural fossil now.

I’m not writing this to unpack the last 10 years of U.S. policy in the Mideast. You can overdose on that elsewhere. It’s just an appropriate day to admit that I got spun into believing things that weren’t so–and so did too many of the journalists who wrote the stories that had helped convince me.

1 thought on “That war I bought into 10 years ago”