Work finds me in Austin this weekend for the SXSW Interactive festival. I’ll have more about that over the next few days; for now, here’s what I have to show for myself, professionally speaking.

The White House surprised many people with its favorable response to a petition seeking the legalization of unlocking cell phones without carrier permission–it said “yes” and then endorsed the idea that carriers shouldn’t be denying service to unlocked phones from other operators. The latter is a somewhat novel idea in wireless but has been been the law in wired since the FCC’s underappreciated “Carterfone” ruling of 1968. But there are important caveats to the White House’s statement, and noting them helped push this post past 1,000 words.

Like many of my USAT columns, this one started with a question from one of my relatives–my mother-in-law couldn’t watch a video of her grandson in her Yahoo Mail account on our iPad’s copy of Safari. The piece also has a tip updating advice I gave in November about sychronizing Google Calendar with an iOS device. 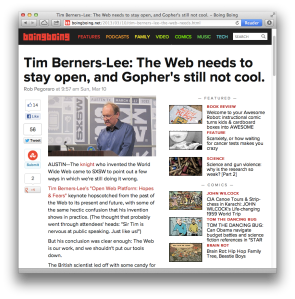 The inventor of the Web had some interesting things to say in his talk at SXSW; after tweeting out highlights of the keynote, I pitched my editor at Boing Boing via Twitter direct message (making this my fastest salesmanship ever) and wrote up this recap later that afternoon.

On Sulia, you could have read me noting the White House’s phone-unlocking petition response (and, in retrospect, reading a little too much out of it) drawing a lesson for tech journalists from the outrage over EA’s botched SimCity launch, called out two still-absent features in Google’s updated Maps apps for iOS, and applaud the seemingly-impossible success of the free WiFi at SXSW.