This week was pretty slow. Next week won’t be. 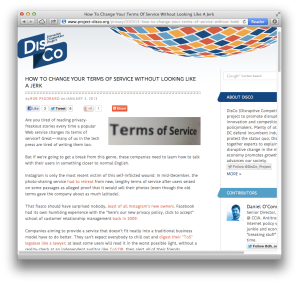 This expands on the post I did for Discovery about Instagram’s terms-of-service fiasco. Instead of yammering on about what that service and others have done wrong, I suggested a few ways they could communicate ToS changes more clearly to their customers.

(But will some other overconfident dot-com ignore this kind of advice and blunder into yet another PR meltdown within three months? Sure.)

1/4/2013: A Guide To Seeing Past CES Hype, Disruptive Competition Project

After attending CES for 15 straight years, I’ve seen more than enough over-hyped debuts go on to flop at retail or never even make it that far. This curtain-raiser goes over a few factors that I’ve seen sink promising CES launches, but two days later I feel like I should have enriched the piece with more historical examples.

A reader question led to the pleasant surprise that printing from Android and iOS is a lot less restricted than Google and Apple’s own solutions would suggest. It also caused me to realize anew how rarely I use our printer-scanner to put ink on paper; since I switched to mobile boarding passes for almost all of my flights, my number-one use for that Canon device is probably scanning in checks for deposit through our bank’s site.