You’d think that success at growing a particular vegetable one year would be easily repeated the next. You would be wrong–at least in my case, considering how this year’s harvest from two raised beds and a couple of large pots departed from last year’s. 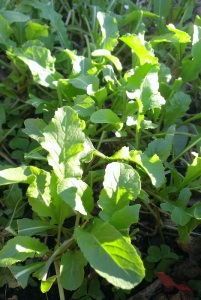 I was sure last year’s plants would reseed themselves, so I foolishly neglected planting seeds until the absence of new growth was obvious. But then I had a good crop in the spring and a fantastic one in the fall. The latter allowed me to go two or three months straight without buying lettuce, and the plants have yet to conk out–that photo is from today.

The cilantro, on the other hand, did reseed itself–in massive numbers. I had more of that I knew what to do with for most of this spring. The parsley and oregano were even more aggressive, the sage exceeded expectations, and the mint was its usual reliable self. But the basil struggled to get going, I had two rosemary plants die on me, the thyme didn’t make it through the summer, and it took two tries before dill established itself.

I did a better job of keeping this pot watered, but I also lost a few berries because I didn’t harvest them in time. I may need to rethink my squirrel-defense strategy, now that these plants have grown enough to poke through the netting draped over the pot. I may build a cheap enclosure of some scrap wood, if the results don’t look completely hanky.

I guess I’m not planting enough of these, because I rarely was able to collect enough beans to make sides for two people. Also, the drought in June hit them pretty hard.

The plants that were last year’s biggest disappointment made a late-season comeback after we took down a large, dying tree that kept them in shade for part of each morning. (Having this black locust removed also deprived Hurricane Sandy of a chance to toss its upper canopy onto, and maybe into, our house.) Now that I’ve established that I can grow tomatoes in this spot–I even picked a few small green specimens last week–I need to space them more widely next year. And to remember that these things reseed like crazy.

I barely got enough to accessorize a few sandwiches.

The seeds I planted didn’t do anything, and the plants that grew from the seeds left by last year’s crop–two of which somehow materialized in the other raised bed–didn’t yield anything edible.

I don’t know how last year’s glut of cucumbers could have been followed by this year’s complete absence of cucumber plants, let alone fruit–nothing reseeded itself, and the seeds I planted after that failure was obvious vanished into the dirt.