It’s been an interesting week for reader comments.

As I wrote here yesterday, I’m liking Apple’s smaller tablet more than I thought I would, and didn’t mind saying so in this review. I don’t know why it didn’t incite the usual comments flame war (“Apple’s awesome!” “No, Apple sucks!”), much less what to make of the gibberish replies a couple of readers left. Was that a case of pocket-commenting, or were they confused about how to spam the comments? 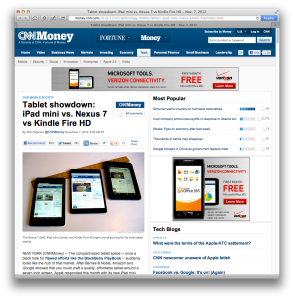 I’ve been trying out Amazon’s Kindle Fire HD for several weeks, but I didn’t get around to writing about it until I did this comparison of it, the iPad mini and Google’s Nexus 7. I’m less impressed with the Seattle retail giant’s tablet efforts the second time around, while the Nexus 7 still holds up pretty well against the iPad mini.

I thought I might get some grief from readers for kicking the Kindle Fire HD to the curb like that, but instead I got several comments from irritated fans of… the BlackBerry PlayBook.

Speaking of irritated fans, this dismissive review of Samsung’s latest oversized phone enraged a few Galaxy Note II partisans, who took to the comments to argue (paraphrasing loosely) that only limp-wristed losers would find this phone too big. One reader even wrote at length on on Google+ that most people don’t even use phones one-handed; I give him credit for saying so in a literate and civil manner, but I still have to regard that as the most delusional analysis I’ve seen since Karl Rove’s election-night math.

I’ve been meaning to write this overview of find-my-phone apps for months, but the wireless carriers’ launch last week of a stolen-phone database finally got me to finish the job. The post also reminds readers that they can turn a deactivated smartphone into a poor man’s iPod touch that can also dial 911 in a pinch, a point I made in a CEA post last fall.