I usually post this on Sundays, but a roughly four-hour delay in Frankfurt stretched my journey home from IFA to 19 hours. On the other hand, one of my regular weekly items got posted a day late as well.

I was delighted not to have my Friday evening wrecked by the need to blog immediately about the $1 billion Apple-Samsung patent verdict; instead, I could take a little time to read up on the case (including some good explanations posted before the verdict that I’d neglected earlier). And once I’d done that, the case looks less damaging to Android and Samsung than the first headlines suggested–even before you factor in the odds of appeals prolonging the case for years. 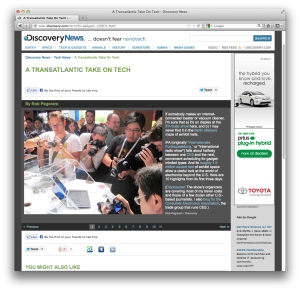 The gadget-porn trade-show photo gallery is bit of a journalistic cliche, but I like taking pictures and telling stories with them–even though it adds up to more work than cranking out 700 words of blog post and illustrating them with only one or two shots. Here, I picked out 10 highlights from the massive IFA convention in Berlin, including two that speak to key differences between gadget markets in the U.S. and the EU.

8/31/2012: Beyond the SHIELD Act: Taking A Sword To Patent Trolls, CEA Digital Dialogue

Did I mention that I have some gripes with the patent system? This post looks at a recent bill (with the obligatory cutesy acronym) that aims to make patent trolling a riskier proposition, then lists a few other patent-reform ideas from such longtime critics of the patent system as the Electronic Frontier Foundation and Techdirt blogger Mike Masnick.

The weekly column, posted this morning instead of its usual Sunday-afternoon timing, covers two browser-specific topics. At the top, I explore the issues involved with using a non-Apple browser in iOS–including how that would be easier if Apple let you set an app besides Safari as your default browser. Then I explain how to selectively disable Flash objects in Google’s Chrome (yes, days after Discovery posted my Flash-required slideshow).