This week’s list has a new site: The Atlantic’s excellent Atlantic Cities, which allowed me a chance to indulge my picky taste in transit user interfaces. I also filed a piece for CEA about a bill that aims to disrupt the patent-troll business model, but it hasn’t been posted yet. 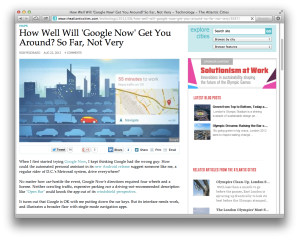 I though the Google Now software in the Jelly Bean version of Android had a weird fixation on driving everywhere, but it doesn’t–this program just doesn’t know to recommend the fastest route regardless of mode. Then again, so do other navigation apps–and since Apple’s iOS 6 will exile transit and bicycling directions from its own Maps program, this problem will get worse.

The post also breaks a little news: Fairfax County’s Connector bus system has finally recognized the user-hostility of offering directions only through Metro’s clumsy Trip Planner site and will instead publish a GTFS schedule feed. That should let you look up Fairfax Connector service on third-party mapping sites–but not, it seems, Google. As GreaterGreaterWashington contributor Michael Perkins reminded me in an e-mail, the county has not signed a questionable legal agreement Google requires.

The Super PAC App iPhone program attempts to identify presidential TV ads by their soundtrack, then identify their source and provide links to stories that provide context and critiques of the ad’s claims. Great idea, but it could be more direct about indicating a spot’s trustworthiness, given the number of outright lies out there.

The weekly column addresses a question I’ve seen more than once: What’s the cheapest way to combine mobile phone service and residential broadband? It also offers a tip that I (ahem) should have acted upon months ago: Check to see if your wireless carrier offers a discount based on your employer, current or former school or even union membership or credit-union account.