I spent the first half of this week at a place I wasn’t sure I’d be welcome–the Cable Show, the annual convention put on by the National Cable & Telecommunications Association. After my wife and I canceled our Dish Network TV service back in October of 2009 and realized we could live without pay TV, I’ve repeatedly suggested that other TV subscribers weigh that option. 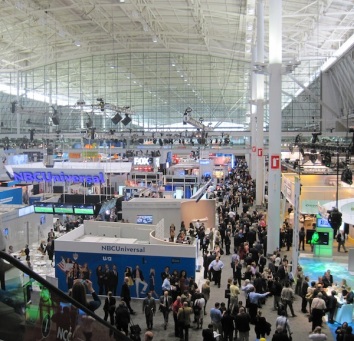 Fortunately, no bouncer tossed me out of the convention center in Boston (disclosure: one reason I attended was the chance to stay with my brother and catch up with his family), and I learned a few things about the market I’ve been avoiding since 2009.

(Yes, even though one of my clients is cable giant Discovery Communications. The irony is duly noted.)

One was that there is an enormous amount of stuff to watch on TV if you’re willing to pay for it–as JetBlue reminded on my way to and from Boston. Another was that the cable industry has recognized that the cable box is not exactly everybody’s  favorite gadget and is working to streamline its interface and reduce its power consumption. (My wrap-up of that awaits an editor’s attention; my photos of the show are up.)

But I also got a reminder that in some fundamental ways, the cable industry thinks it’s doing fine–NCTA president Michael Powell said in his opening keynote that “this industry has never been content to rest on aging business models”–and doesn’t need a fundamental change of course.

I don’t recall hearing the words “à la carte” spoken at any point, nor did I run into any serious discussions about the lesser step of offering subscribers a wider choice of channel bundles. “AllVid”–a nebulous proposal by the Federal Communications Commission for a unified standard for subscription-TV reception that might open the market for tuning and reception hardware–only came up when I asked an FCC staffer about it after a panel on regulatory issues had failed to mention the topic.

And you can continue to forget about paying for real-time online access to shows without the conventional cable subscription required by such Web-viewing options as HBO Go. The industry sees that and other cable-subscription-first “TV Everywhere” offerings as customer-retention moves, not ways to draw in new viewers.

And as for cord-cutting–a topic that drew me to Boston a year ago, when I led a panel about the topic at Free Press’s media-reform conference–the cable industry doesn’t seem to think it’s a serious issue. Chief executives and lower-ranking staffers all repeated that it’s not losing any viewers it would want to keep. For example, during Tuesday’s opening session, Time Warner CEO Jeff Bewkes said a predicted wave of cord cutting “didn’t happen” except for “economically challenged customers… many of who didn’t even have boadband at home.”

I thought about standing up, waving my hand and shouting “dude, I’m right here!” But I did not.

I might have also said then that my brother and his wife cut the cord last summer (while retaining a Comcast Internet connection). After day one of the show, I went home to my brother’s house and watched a few episodes of NBC’s Community on his paid-for Hulu Plus subscription. After day two, we caught an episode of HBO’s Game Of Thrones that he obtained… somehow.

11 thoughts on “A cord cutter visits the Cable Show”