When I look back on this year–not when writing the-year-in-tech stories like the one I’m writing for CEA’s blog, but when I consider how 2011 treated me in particular–the same phrase keeps coming up: Did all that really happen? 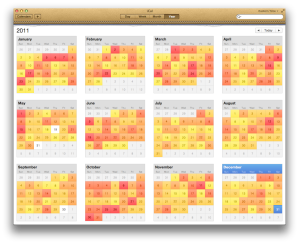 Were my circuits that fried from overwork and increasingly dire hints that my job was in danger that I felt a vague sense of relief to get a severance offer?

Did I somehow manage to keep a lid on this news, outside of sharing it with my family, then close friends and finally a handful of dismayed coworkers, for a month before announcing it myself? (It was instructive to look through my Facebook Timeline for March and April to see how completely I avoided any mention of Topic A while the union was negotiating on my behalf.)

Did I really walk out of the Post’s newsroom on April 15 for the final time after almost 17 and a half years of employment there? (To old Post friends reading this: I miss you guys.)

Was it a full month before I realized that I had stopped feeling the old stress?

Have I seriously avoided rewriting anybody else’s iPhone-rumor stories since April?

How did the squirmy baby of last December become the toddler running around our house, picking up random things and sometimes calling me “Dada”?

After at least two decades of wishing I could find a way to make it happen, did I finally see the space shuttle launch—twice?

Had it been that long since I’d had the time to write a second draft of a story?

Have I actually found a sufficient variety of sufficiently-generous freelance clients–assuming they don’t all realize their error–that I feel more confident about my prospects than I did a year ago?

Somehow, all of those things happened. Considering how tough things remain for too many other Americans, I feel damned lucky.

Happy new year, everyone. I hope it finds you well.